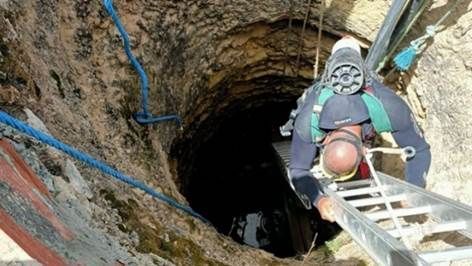 In Tunisia, while escaping from a mentally ill, a schoolgirl fell into an abandoned well 14 meters deep

I passed protection police The city of Ben Arous, Tunisia, last night rescued a schoolgirl after she fell into a well in the Naasan region Ben Arous GovernorateIts depth is 14 metres.

Referring to the incident, the 17-year-old student called “Maleka Al-Hasnawi” was with her colleagues about to escape for fear of a mentally disordered person while returning from the institute to her home, to slip her feet and then fall into an abandoned well.

Immediately, the Civil Protection Police were informed, who quickly turned to the scene of the accident, and after attempts that lasted for nearly two hours, the competent team succeeded in saving the student’s life while she was alive.

Ezzedine Chalabi, Wali of Ben Arous, civil protection police officers, praised him for their efforts to avoid any harm that might happen to the girl.

The girl was transferred to Charles Nicole Hospital in the Tunisian capital, and she is currently receiving medical care after suffering some bruises and fractures.

Shalaby added that it is therefore necessary to fill in the abandoned well, which is owned by a private property, as soon as possible, given the danger it poses, especially since the plot of land in which this well is located is adjacent to a school.

Süleyman Soylu could not answer, he cursed and fled.

Judite Sousa confides having had a difficult and trauma-filled childhood: “I felt I had to overcome my life narrative”

‘I started to understand some of my behaviors better’

Facebook Twitter WhatsApp Telegram
Back to top button
Close
Featured Posts
It turned out that the company that undertook the construction of the yacht Yakamoz filed a lawsuit because it could not get paid.
August 26, 2022

It turned out that the company that undertook the construction of the yacht Yakamoz filed a lawsuit because it could not get paid.

Gargash: Erdogan’s visit to the UAE opens a positive page

Up to 160% of the price of goods .. parcel taxes are causing a stir in Algeria

‘Stadium conditions are far behind our competitors’
December 27, 2022

‘Stadium conditions are far behind our competitors’

First case of monkeypox detected in New York
May 22, 2022

Railway workers in the UK go on strike

“China has the right to take action to protect its sovereignty”
August 3, 2022

“China has the right to take action to protect its sovereignty”