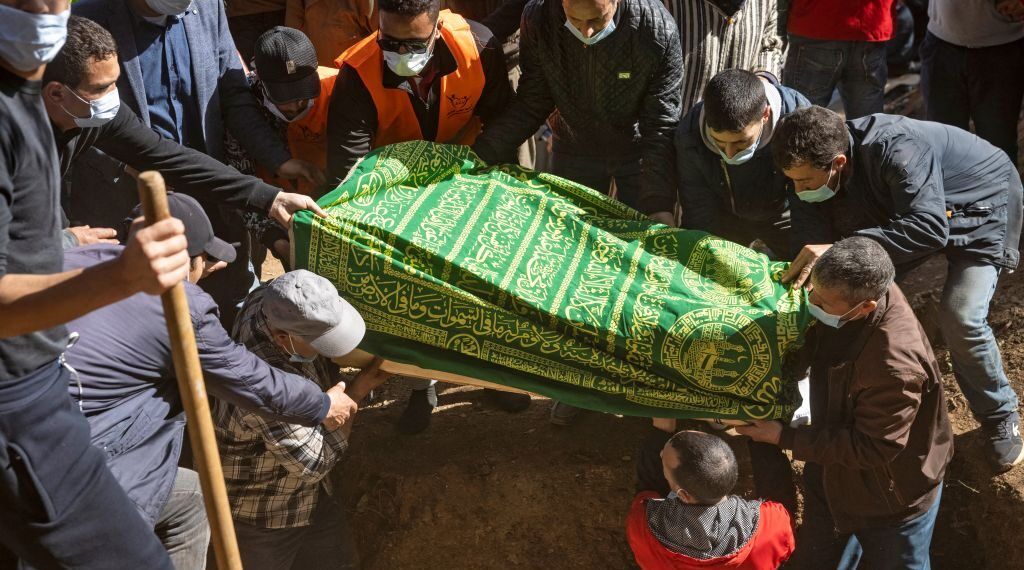 The world bids farewell to the Moroccan child Ryan

Thousands of Moroccans mourned Monday afternoon Moroccan child Rayan in the village of Igran in the northern Chefchaouen province. The convoy came from the capital, Rabat, amid significant security reinforcements.

Hundreds of people went to the home of the Moroccan child’s family Rayan For condolences and sympathy.
After announcing the official news of his death, the Royal Court clarified in a statement issued on Saturday that King Mohammed VI had telephoned Rayan’s parents and expressed his deepest condolences to all family members, as well as his appreciation for the tireless efforts of the authorities during the process of removing Rayan from the well.
The operation to rescue Rayan, a 5-year-old stuck in the middle of a well 60 meters deep and not exceeding 30 cm in diameter, on the outskirts of Chefchaouen, in northern Morocco, occupied the whole world.

The incident witnessed great sympathy from all over the world, as tweeters posted on the social networking site “Twitter”, pictures of the child and attached them to blogs in different languages, and launched many hashtags.

The child spent about 100 hours inside a narrow hole in the well, during which he suffered a hemorrhage in his head due to hitting the rocks during his fall. Medical examinations conducted by the medical team that entered the tunnel to extract the child Ryan showed that he was suffering from fractures in the neck and spine.

The election of a President of the Republic was postponed until further notice, Monday, after it was not possible to complete a quorum during a session of the House of Representatives, following a series of boycotts previously announced by the political blocs, most notably the Sadrist bloc. The Iraqi Council of Representatives was called to meet on Monday to elect a president of the republic, but the positions issued by parliamentary blocs and deputies announced a boycott of the session, which led to a lack of a quorum. These positions were preceded by the announcement of the Iraqi judiciary to suspend the candidacy of one of the most prominent candidates for the presidency, Hoshyar Zebari, as a result of suspicions of corruption.
Based on a lawsuit submitted by four deputies, the Iraqi Federal Court, which is the highest judicial body in the country, decided on Sunday to “temporarily suspend the procedures for electing Hoshyar Zebari until a case is resolved” against him related to accusations of corruption against him.
An official, who declined to be named, told AFP that “today’s session has turned into a deliberative dialogue session, and there will be no vote to elect the president of the republic due to the lack of a quorum, which requires two-thirds of the number of parliamentarians.”

Sudanese police fired tear gas canisters in an attempt to disperse thousands of protesters in Khartoum against the campaign of arrests carried out by army chief Abdel Fattah al-Burhan more than three months ago.

Police fired tear gas and colored water canisters to disperse the demonstrators, about 500 meters from the presidential palace in the center of the capital, injuring some.

Thousands of Sudanese opposed the arrests in the center of the capital and its neighboring cities, Bahri and Omdurman, to demand civilian rule and the trial of those responsible for the killing of protesters, according to agency journalists and eyewitnesses.

“The military is in the barracks and the Janjaweed are dissolved,” the demonstrators chanted, referring to the Rapid Support Forces, which emerged from the Janjaweed militias, who were accused by human rights organizations of committing war crimes in 2003 in the western Darfur region.
The protests spread outside the capital, where Khaled Youssef, an eyewitness from the city of Wad Madani, the capital of Gezira state, which lies 186 km south of Khartoum, said, “At exactly one, about 3,000 demonstrators gathered. Some of them carried Sudanese flags and pictures of the martyrs and began chanting No, no to the rule of the military.”

What is the plot of the movie Ivan’s Childhood, who are the actors?

Erdogan targeted CHP and Six Tables: They will definitely be liquidated

Horror in Istanbul! Helmeted attacker rained bullets on his opponent

‘Fener’ reaction from the Turkish Orthodox Patriarchate: Macron’s addressee is not Bartholomew
September 5, 2022

‘Fener’ reaction from the Turkish Orthodox Patriarchate: Macron’s addressee is not Bartholomew

A contractor sold the same house to 5 people in Avcılar.

Zeynep Bastik, who broke her spine, shared her latest version

‘The current paper money is not enough in the inflation fire’
November 1, 2022

‘The current paper money is not enough in the inflation fire’

The 1.1 billion euro fine imposed on Apple was reduced
October 7, 2022

The 1.1 billion euro fine imposed on Apple was reduced