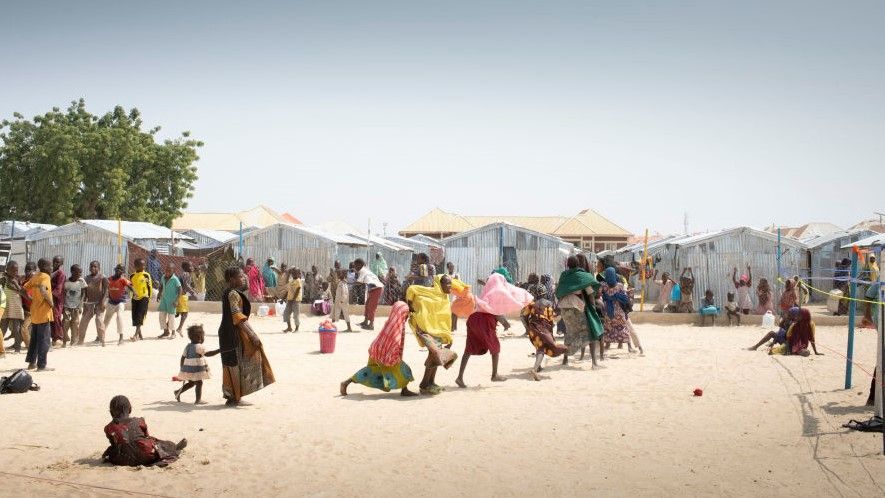 In addition to the difficult conditions, the displaced from the Boko Haram attacks are forcibly returned

The British newspaper “Daily Mail” reported that areas of Borno State in Nigeria are still unsafe, despite the overall decrease in attacks on civilians compared to previous years. The government is moving forward with its plan to shut down all

Camps housing IDPs by 2026, have closed so far six sites hosting between 100,000 and 150,000 people, according to government sources, the reason behind the closure is due to the unsustainable over-reliance on aid

Under the new plan, people may move to cities closer to their home village that has a military presence or to areas where soldiers are willing to deploy, but aid groups cannot go to most of those areas.

The sites are at risk of being directly targeted by Boko Haram fighters.

Witnesses confirm to Top Data that life was better in the camp because they feel safe, unlike in their villages, and despite the presence of Nigerian forces in cities across the state, the Boko Haram rebels are not far away.

Never, and the Boko Haram insurgents continue to roam the rural areas.

As a result, many displaced people choose to remain in the places that were built to protect the towns, whether in government-provided housing or in existing camps.

Bama camp, which is the second largest city in the state, doubled its capacity, as it was built for 35,000 people, while hosting about 70,000 people.

Bama camp, the second largest city in the state, hosts twice its capacity, as it was built for 35,000 people, while it hosts about 70,000 people.

Saveratu Solomon, a displaced person in Gubbio camp on the outskirts of the country, says: MaiduguriShe is tired of the poor living conditions and sitting without work, especially after food distributions stopped seven months ago in the camp, which

More than 22,000 people, according to her mother, Martha, are afraid to go to work on farms outside the city limits. To make matters worse, the government told them last year that the camp would be closed without setting a date.

The situation is not much different in Dalori 2 camp, where more displaced people are anxiously awaiting the news, and seven months ago state officials conducted a census of people to identify the actual displaced and give them a registration card that enables them to

Returning to their homes and preparing them for some food, three displaced people told AFP that since then nothing has happened, adding that they were waiting for transportation to their villages or at least money and food for the journey.

About 11,000 people live in this camp, for whom food aid stopped four months ago, while the United Nations agency responsible for coordinating the humanitarian response and the World Food Program did not respond to questions about the shortage.

Food in the camp.

The tube in the restaurant exploded like a bomb in Oman: 8 injured

Ray tracing support was introduced to game consoles for GTA 5

Çağdaş Atan: ‘I am proud of my players’

Investigation launched against cryptocurrency exchange FTX in the USA

Sami Karaören was buried after the ceremony held in our newspaper.
May 13, 2022

Sami Karaören was buried after the ceremony held in our newspaper.

Adana… The brothers of the girl he texted cut her face with a razor!
October 25, 2022

Adana… The brothers of the girl he texted cut her face with a razor!

‘Inflation increase rates do not have a direct effect on his salary’
July 23, 2022

The Libyan parliament approves the constitutional amendment by an absolute majority
February 10, 2022

The Libyan parliament approves the constitutional amendment by an absolute majority

Confession of the government’s ‘US license’
October 15, 2022

Confession of the government’s ‘US license’