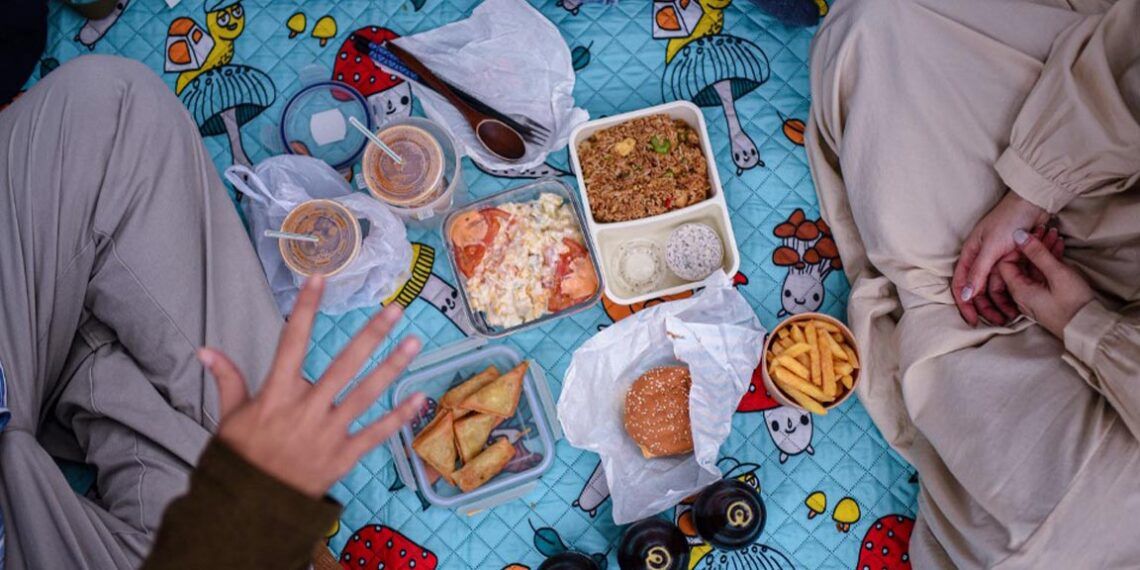 Near a sled for children wrapped in tape to prevent its use due to measures to combat Covid-19, three friends in their own way resist the restrictions imposed by tracking applications dedicated to combating the spread of the epidemic, by eating on the spot, like many who chose this method of meeting outside, away from the radars Authority.

Since December, anyone between the ages of 18 and 65 who wishes to enter a restaurant in Hong KongScanning a QR code via a special app called “Leave Home Safe”, under penalty of a hefty fine.

Such applications have been developed around the world, but in a city whose authorities relentlessly hunt dissidents, there is a growing wariness of highly sophisticated tracking technologies.

Two of the three friends dining in the park created a Facebook group called Leave Home Wild to invite their friends to meet outside.

Within two months, the group of friends Bo and Birdie, whose full names were withheld for security reasons, had grown from 50 to more than six thousand.

“I simply don’t like anything being imposed on me,” Purdy told AFP while dining in the garden with her friends Beau and Dominic.

However, people who evade stalking may be labeled as “reluctant”.

After widespread and sometimes violent protests in Hong Kong in 2019, Beijing tightened its grip on the city. The Legislative Council no longer includes only “patriots” among its members.

Bo says that taking such outdoor outings away from the radars of the tracking devices constitutes a kind of resistance against the many measures imposed by the local government in line with China’s “zero COVID” policy.

The first rule of his online group is not to invite others to boycott the official app.

A member of the group wrote on Facebook, “I am very disappointed. But I will never erase this code to eat in a restaurant.”

Despite repeated assurances from the government about the integrity of the data, many are concerned about the way the information is collected and stored.

“The source code has never been available to us so there is no way for people to check where their data is going or how it’s being processed,” he adds.

Currently, users’ information on the app is associated with a phone number, not a name, and movements outside of the QR codes that are scanned are not tracked.

This tracking and monitoring strategy contributed to the containment of the pandemic at a weak level in this former British colony.

However, the information collected by the application is transmitted to the Chinese authorities when a person wants to visit mainland China, thanks to a health program that contains the person’s name, phone number, identification number and address.

The Hong Kong government is very interested in technology, and has recently made this application a necessary condition for obtaining a mandatory health permit to enter a large number of public places, from cinemas to administrative headquarters.

“People cannot express their concerns through elected representatives, nor demonstrate, nor gather in the streets (…) What other option do we have but not to participate?” says Poe.

While the list of places to use this app is expected to expand, the three friends don’t know how long they will be able to withstand the system.

Poe and Dominic made a compromise by downloading the app to a second phone they each bought, and Birdie so hardened that she missed her best friend’s wedding.

“What kind of relationship between me and the government allows it to track my steps to such a degree?” she asks.

Three suspects arrested for robbing houses in the Algarve

Tunisia arrests a young man who tried to stab a policeman

The terrorist organization YPG/PKK drives children to the conflict area under the name of “mobilization”
May 16, 2022

Tragedy of a Spanish family..They were killed because of "school grades"
February 13, 2022

Tragedy of a Spanish family..They were killed because of "school grades"

On the impact of the war .. Egypt cancels a tender to import wheat
February 25, 2022

On the impact of the war .. Egypt cancels a tender to import wheat

‘Fenerbahce and Galatasaray are not enemies’
December 20, 2022

‘Fenerbahce and Galatasaray are not enemies’

Research proposal from CHP on malnutrition in school-aged children
September 19, 2022

Research proposal from CHP on malnutrition in school-aged children

It kills its enemies and eats their meat..a gang that stirs terror in Mexico
February 15, 2022

It kills its enemies and eats their meat..a gang that stirs terror in Mexico