At least 13 people were killed and dozens injured in an accident involving a bus carrying workers for a beach holiday on the island of Java, in Indonesia according to the police.
The bus, carrying 47 passengers, was heading from Sukoharjo in Central Java to a family gathering in Yogyakarta province when the driver lost control of it, police confirmed late Sunday.
“Witnesses who were questioned said they saw the driver in a panic when he tried to move the gearshift stick, so there is an indication of a brake failure,” Bantul police chief Ehsan told reporters. 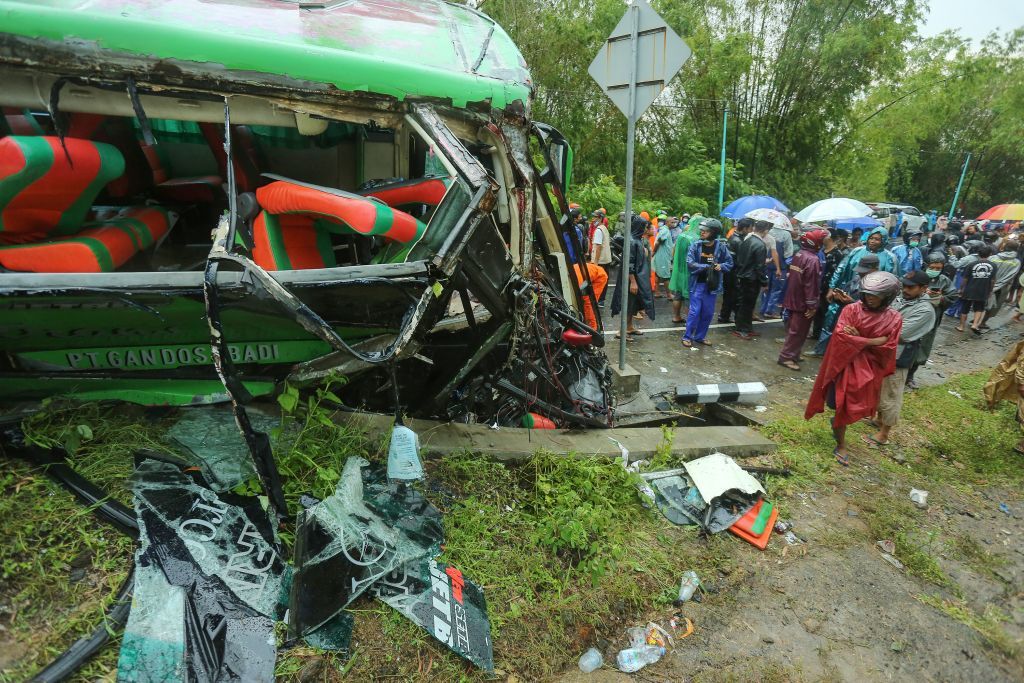 Fatal traffic accidents are frequent in Indonesia, which has a population of 270 million, where vehicles are often old and poorly maintained and drivers ignore road safety rules.
Ehsan said, “13 people were killed. Some were killed instantly on the spot, while others died while undergoing treatment in hospital. 34 people were injured.”
The driver was among the dead when the bus overturned and crashed into the side of the road, smashing its front and causing severe damage to its right side.
The police chief stated that several passengers sustained head injuries, and three infants were injured.

He said that shortly before the accident, passengers were asked to get off temporarily, as the bus was having difficulty getting up the hill.
In March of last year, a bus carrying dozens of people fell into a deep ravine in Sumdang (and West Java province), killing 29 people.
In late 2019, 35 people were killed when a bus plunged into a ravine, also on the island of Sumatra.

Mine workers in Amasra took action: ‘We want merit in appointments’

WhatsApp correspondence about the bomb attack in Taksim appeared

David Beckham waited in line: ‘This is insane!’

‘The whole load will be on the back of a citizen who has a patient who uses diapers’
July 1, 2022

Ex-lovers found shot in the heart in Bakırköy

‘There is no such thing here’

They entered as “customers” and robbed the management office
May 18, 2022

They entered as “customers” and robbed the management office

Africa-Europe Summit: Eye on Terrorism and “Crisis of the Sahel”
February 17, 2022

Africa-Europe Summit: Eye on Terrorism and “Crisis of the Sahel”

Bad news from Adele to her fans

With 150 goals for Liverpool .. Mohamed Salah joins the list of “10 legends”

Çavuşoğlu shouted at Swedish minister ‘I am disturbed by your feminist policy’
May 18, 2022

Condolence message from Kılıçdaroğlu for the two soldiers who were martyred in Claw-Kilit
July 7, 2022