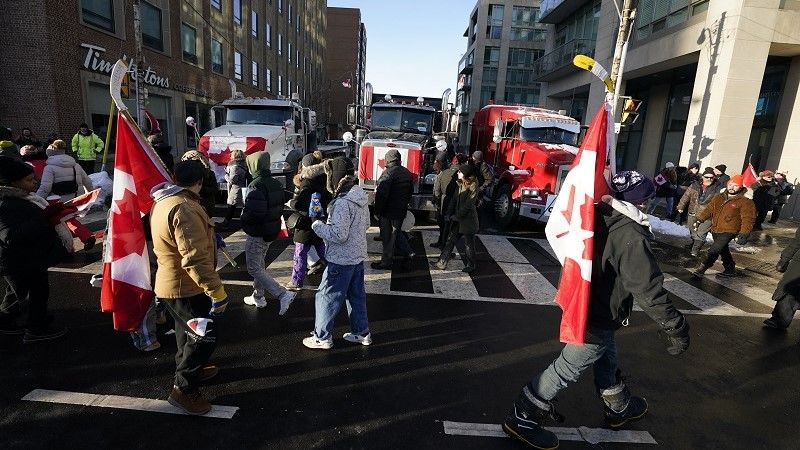 Opponents of health measures began in Canada Some of whom have been occupying for a week in the center of the federal capital, gathered Saturday in Ottawa, Toronto and Quebec to demand the lifting of restrictions imposed to combat the Corona epidemic.

This protest movement, which started from a movement of truck drivers in the west of the country, turned into a sit-in in central Ottawa. For eight days, demonstrators and dozens of trucks have occupied the streets in front of Parliament and in front of Prime Minister Justin Trudeau’s residence.

The first demonstrators arrived on Saturday morning to the capital in the cold weather and gathered around the fires, waving Canadian flags and anti-government banners, in a more festive atmosphere than last Saturday when Nazi flags were seen.

Some began to set up temporary shelters, as the temperature is expected to drop to minus thirty degrees Celsius, threatening not to leave before the restrictions are lifted.

and expect the police Two thousand protesters will join the truck drivers on the streets of Ottawa, with a thousand people expected to participate in a counter-demonstration.

As for the organizers of the movements, they expect tens of thousands of demonstrators.

The police tightened for the first time on Friday against the demonstrators, and vowed to “end this illegal and dangerous demonstration to an unacceptable degree,” according to the police chief, Peter Slolly, who did not mention any specific date.

Despite the discontent of Ottawa residents, the government ruled out the possibility of sending the army to expel the demonstrators. However, on Saturday, 150 additional police were deployed on the streets of the capital

Ontario Premier Dag Ford once again asked the protesters to leave Ottawa, deeming the situation “unacceptable”, after a petition calling for the police to evacuate the demonstrators gathered about forty thousand signatures on Friday afternoon.

So far, no call has dissuaded the intent of the protesters, who had originally gathered to protest the mandatory vaccination of truck drivers crossing the Canada-US border.

“We will stand against them for the time required in order to get rid of the restrictions,” Jim Turma, one of the protest coordinators, told AFP.

“It is not a question of a vaccine, it is our freedom,” said Kimberly Paul, who came to demonstrate with her husband after a five-hour drive in the car.

“It’s really hard…there are people we know, friends, who have lost their jobs because of these restrictions” on the vaccine, she added.

Police in Toronto closed some downtown roads on Friday in an effort to limit disruptions that could affect access to emergency services and hospitals.

The city’s mayor, John Tory, told a news conference he hoped the demonstration would take place “with respect and peace.”

“We all want to do everything we can to avoid a situation similar to (what is happening in) Ottawa,” he added.

The Ottawa police chief confirmed that Canadian authorities now care about those who “finance and allow this illegal and harmful demonstration.”

A fundraising campaign on Go-Fund-Me has allowed the movement to raise more than ten million Canadian dollars (6.8 million euros) so far.

Police said part of that amount came from the United States.

On Friday, the platform announced the suspension of the campaign, and indicated that the remaining funds would be redistributed to charities.

Surveys indicate that only a minority of Canadians (32 percent) support the truck driver movement, but this represents a larger proportion of the unvaccinated population of 10 percent of Canadian adults.

The health measures imposed by the provinces in Canada are still very binding and are among the most stringent in the West.

And the province of Quebec is one of the regions in the world where the isolation of the largest number of days has been imposed on its residents.

What zodiac sign is December 6? Which celebrities were born on December 6?

To confront the Russian invasion, the Ukrainians are rushing to the trick of the old wars
February 13, 2022

To confront the Russian invasion, the Ukrainians are rushing to the trick of the old wars

“War of Words”… The escalation of diplomatic exchanges between Russia and America
February 17, 2022

Erdogan had a phone conversation with Pakistani Prime Minister Sharif

The situation in Donbas is extremely difficult
May 22, 2022

The situation in Donbas is extremely difficult

Thracian citizens seek salvation at the ballot box
May 23, 2022

Transfer does not end in Fenerbahçe!

Statement from the Minister Institution on the increase in housing and rental prices
May 19, 2022