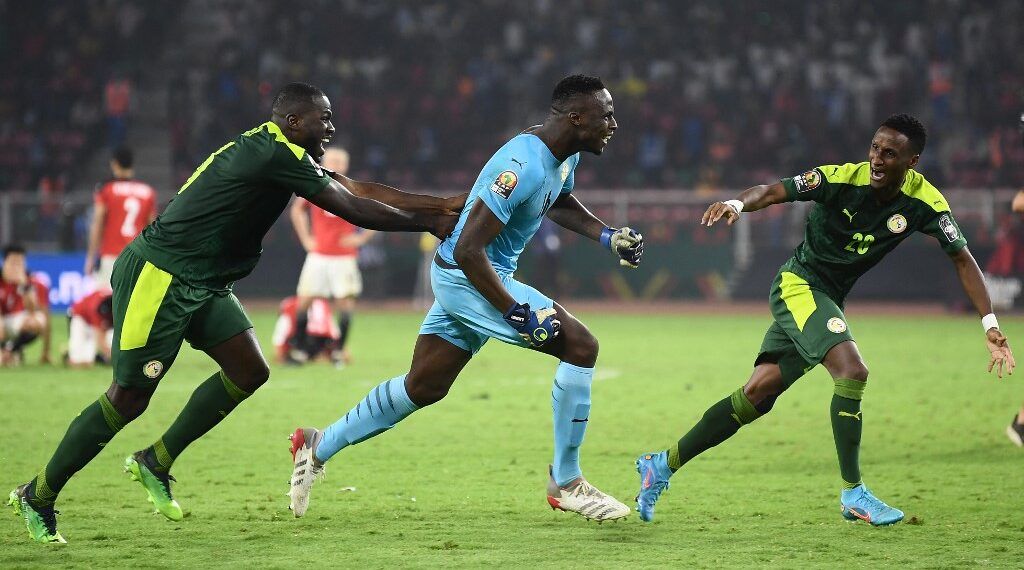 Senegal is the African Cup of Nations champion

Senegal won the African Cup of Nations for the first time in its history by defeating its Egyptian counterpart in the final match, which was held on Sunday evening at the Olympic Stadium in the Cameroonian capital, Yaounde.

The first minutes of the match witnessed great excitement, as the referee awarded a penalty to the Senegalese team less than 5 minutes after the start of the whistle, after the captain of the Teranga Lions, Sadio Mane, was fouled by the Pharaohs defender Mohamed Abdel Moneim inside the penalty area.

Mane tried to take the kick, but the Egyptian goalkeeper, Mohamed Abu Jabal, excelled and succeeded in blocking the ball, to save the Pharaohs from receiving an early goal that would have complicated the accounts.

The Egyptian star, Mohamed Salah, grabbed the attention before taking the Senegalese kick, as he went to goalkeeper Abu Jabal and told him of Mane’s preferred angle, and then the Egyptian goalkeeper managed to block the kick in front of the Liverpool striker.

The Senegalese team continued its attacks and showed a great danger to the Pharaohs’ goal, but the Egyptian team’s defense succeeded in addressing all attacks and reducing their danger.

And in the 30th minute, Sadio Mane launched a quick attack on the left hallway and tried to penetrate into the penalty area, but the Egyptian defense succeeded in stopping him.

In the 43rd minute, the Egyptian star Mohamed Salah penetrated the right corridor and evaded the Senegalese defenses to launch a superb shot into the narrow corner, but Chelsea goalkeeper Edward Mendy managed to block the ball and send it to a corner kick.

Despite the two teams’ attempts on goal, the first half ended in a goalless draw, while the goalkeeper of the Pharaohs, Muhammad Abu Jabal, imposed himself as a star for the half, after he saved the penalty kick.

With the beginning of the second half, Senegalese attacks continued on the Egyptian goal in order to score the goal of progress, but Muhammad Abu Jabal wore the glove of skill and stood as an impenetrable dam against all the attacks of the Teranga lions.

In the 75th minute, the Pharaohs had the most dangerous chances, as substitute Marwan Hamdi headed a header inside the penalty area, but the ball went next to the post.

Despite the successive attempts by the two teams to score the goal, the goalless tie dominated the match until the end of the second half, so the two teams resorted to extra time.

The last minutes of the second extra period witnessed great excitement, as there were some dangerous chances to score from the two teams, but goalkeepers Muhammad Abu Jabal and Edward Mendy continued their brilliance and kept their clean sheets.

The two teams resorted to penalty kicks, which smiled at the Teranga Lions to win 4-2 and crown the African title for the first time in history.

After the death of Hıncal Uluç, Defne Joy Foster became the agenda on Twitter

Police intervened in the rebellion of the citizens, whose electricity, water and natural gas were cut off in Okmeydan
June 9, 2022

Police intervened in the rebellion of the citizens, whose electricity, water and natural gas were cut off in Okmeydan

Ukraine’s counteroffensive and the overall picture

Solomon Islands exit from China: We will not establish military bases
May 27, 2022

Solomon Islands exit from China: We will not establish military bases

Criticism of the Constitutional Court against the court decision regarding the person who was fired due to FETO affiliation
May 18, 2022

The repercussions of the war .. Will Algeria compensate Europe for Russian gas?
March 2, 2022

The repercussions of the war .. Will Algeria compensate Europe for Russian gas?

Ukrainian President: Russia will launch an attack on Kiev tonight

Quadruple .. Al-Ahly hardens Al-Hilal and scores “third in the world”