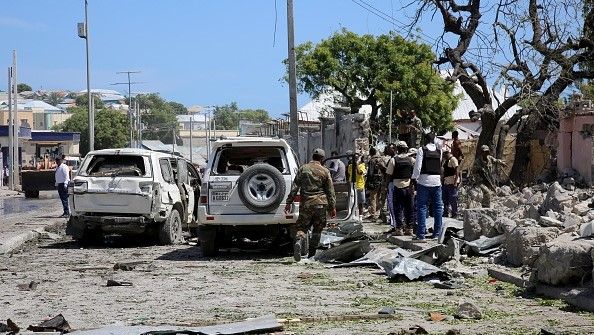 Al-Shabab bombed civilian neighborhoods in the city of “Barawa”

Local residents in Barwa, Somalia, reported that four civilians, including a woman, were killed and nine others were wounded, as a result of a mortar attack, believed to have been carried out by fighters of the terrorist group Al-Shabab.

The attack took place during the meetings of 13 MPs in the city on Wednesday, and the residents confirmed that they heard five mortar shells, two of which hit residential areas.

Media sources added that the shells fell on the “Sakhwaldin” and “Diah” neighborhoods, while the city witnessed a temporary interruption in the Internet service.

Al-Shabab has recently intensified its attacks on cities that are witnessing activities related to the selection of new parliament members, with the aim of obstructing the electoral process.

Media sources close to the Al-Shabab group indicated that the group assassinated an element of the Somali forces by a special assassination squad called the “security detachment.” SomaliaThe group’s fighters also raided a military barracks for the Kenyan forces in the town of “Tabeto”, located in the same governorate.

And the sources announced the continuation of the attacks launched by the group on the Kenyan forces stationed in the vicinity of the town of “Ras Kamboni”.

The group claimed responsibility for an explosion that occurred on Tuesday evening, which led to the destruction of a military truck of the Kenyan forces and the killing and wounding of four soldiers, as a result of the group’s fighters targeting a military convoy that was transporting military equipment, by detonating an explosive device planted by al-Shabab fighters near the town.

Assassination in Mogadishu and attack in Bosaso

In another context, Al-Shabab claimed responsibility for the assassination of “Mahmoud Jamea Agal”, a member of the Somali government’s parliament election committee, at the hands of its members in the Harwa district of the Somali capital, Mogadishu.

Meanwhile, the group claimed responsibility for the killing and wounding of 9 members of the government forces affiliated with the federal state of “Puntland”, after they were targeted by an explosion carried out by Al-Shabab fighters in the coastal city of Bosaso in the Barri governorate in the north-east of the country.

Traffic of meeting with the Istiklal bomber: MHP chairman was also summoned to the Police

Malaysia enacts a law banning smoking for children born after 2005

With the participation of 6 thousand players .. the opening of the Egyptian Championship for"kickboxing"

Facebook Twitter WhatsApp Telegram
Back to top button
Close
Featured Posts
The Presidential Government System must be renewed, it does not work well
July 23, 2022

The Presidential Government System must be renewed, it does not work well

Settlements close to the fire are being evacuated
June 21, 2022

Settlements close to the fire are being evacuated

Egyptian exit from Turkish official: Ambassadors may be appointed in March
December 9, 2022

Egyptian exit from Turkish official: Ambassadors may be appointed in March

A second body hit the Sinop İnceburun shore with an interval of 9 days.
July 11, 2022

A second body hit the Sinop İnceburun shore with an interval of 9 days.

Roofs of houses and barns were blown off, walls collapsed due to tornado in Erzurum.
October 8, 2022

Roofs of houses and barns were blown off, walls collapsed due to tornado in Erzurum.

Russian missile strikes on Odessa… and a “serious accusation” against America
May 7, 2022

Russian missile strikes on Odessa… and a “serious accusation” against America

HKP protested the opening of the US Embassy built on the land of Atatürk Orman Çiftliği
August 29, 2022