The odds are that Russia, China and Iran are behind these cyber attacks

Today, the world is fighting a new war, a war of another kind based mainly on misinformation and propaganda that authoritarian countries resort to in an attempt to destabilize democratic countries in order to achieve certain goals without incurring losses in money or lives.

and face Sweden Today, there is a war of this kind, and it is working through the Swedish Psychological Defense Agency to combat misleading and false information broadcasted by some foreign governments, most notably Russia, China and Iran, in an attempt to destabilize Sweden, influence the Swedish citizen and perhaps direct his choices in the upcoming elections.

What is this new agency launched by Sweden and what are its objectives? How do you protect citizens from cyber attacks launched by these countries? And what are the possible targets of the information war that Russia, China, Iran, and perhaps others are waging against Sweden? Now TV got answers to these questions in an interview with the head of a department at the Swedish Psychological Defense Agency Magnus Hurt He stressed that “the agency’s goal is to protect our open democratic society and preserve freedom of expression.” “One of our main tasks is to identify, analyze and combat malicious foreign information, as well as combat the impact that disinformation and other disinformation may have directed against Sweden or Swedish interests. That’s why we are leading the coordination and development of Sweden’s psychological defense in cooperation with others as well.” .

The agency is headquartered in Carlsbad with an office in Solna and is headed by Director General Henrik Landerholm, a former ambassador, and has 45 employees.

On its website, the agency explains that disinformation may be aimed at “weakening the resilience of the state and the will of the population to defend itself or undue influence on people’s perceptions, behaviors and decision-making.”

As for the practical steps that the agency applies to combat misinformation, Hurt said: “We first and foremost monitor what foreign governments are doing against Sweden, monitor their contacts and activities with regard to Sweden, and then participate on a wide level in building capabilities and capabilities within the country. We support government agencies, municipalities, regional actors, organizations and companies to spread awareness about misleading and false information by foreign actors.”

He pointed out that the agency will “campaign to raise awareness about issues of misinformation, we have training exercises, and we have courses for journalists, so our mission is to raise awareness and spread information to inform people in order to protect our elections, so spreading awareness is what we’re really doing.” Our campaign has already started, but we’re planning it now and we’ll see what happens.”

Regarding the regimes that are trying to destabilize Sweden, Hurt said, “They are basically authoritarian regimes, and they resort to the use of misinformation as one of the main tools to achieve their goals and influence the parties that target them. It is historically known that Russia and China use these tools, but it is possible to resort to that.” Other countries as well.” As for the impact that this information could have on the Swedish citizen, he said: “The aim of this information is, of course, to destabilize. They can spread misinformation about how Covid or vaccines work in order to destabilize Sweden, the goal could be to influence people to not Vote in the next elections. He stressed that “protecting the elections will be one of our main tasks this year. For a foreign opponent, it may be very exciting to influence our elections, of course, depending on issues that may jeopardize our upcoming elections and that we do not know yet. It is possible by relying on the topics covered by the campaigns, may It’s more interesting for a foreign adversary or for an authoritarian country trying to influence us.” “Of course we want a big turnout, in a vibrant democracy like Sweden it might be an interesting thing for a foreign opponent to convince people not to vote, it might be one of those things that a foreign opponent would be interested in,” he added.

Forbes recently noted that Sweden’s concern about interference in its 2018 elections led to the creation of the new agency. Swedish officials have cited Russia, China and Iran in the past, according to Forbes, as sources of disinformation campaigns, and Landerholm cited Russian attempts to interfere in the US presidential election.

It is also said, according to Forbes, that about 10% of Swedes read the Russian news site Sputnik, which is usually described as a propaganda service, which is often critical of liberal attitudes in Sweden and aims, according to Landerholm, to destabilize or undermine confidence in government agencies.

Hurt believes that all Western countries have done their part to protect themselves from misinformation since 2014 or 2015 “but I think a few countries have an agency just for this, the French have a new agency called Vision that was launched in the fall of 2021 It works in a similar way to our agency, but all countries have their own ways of tackling this depending on political traditions and so on, but it’s a global phenomenon that we all really have to address.” 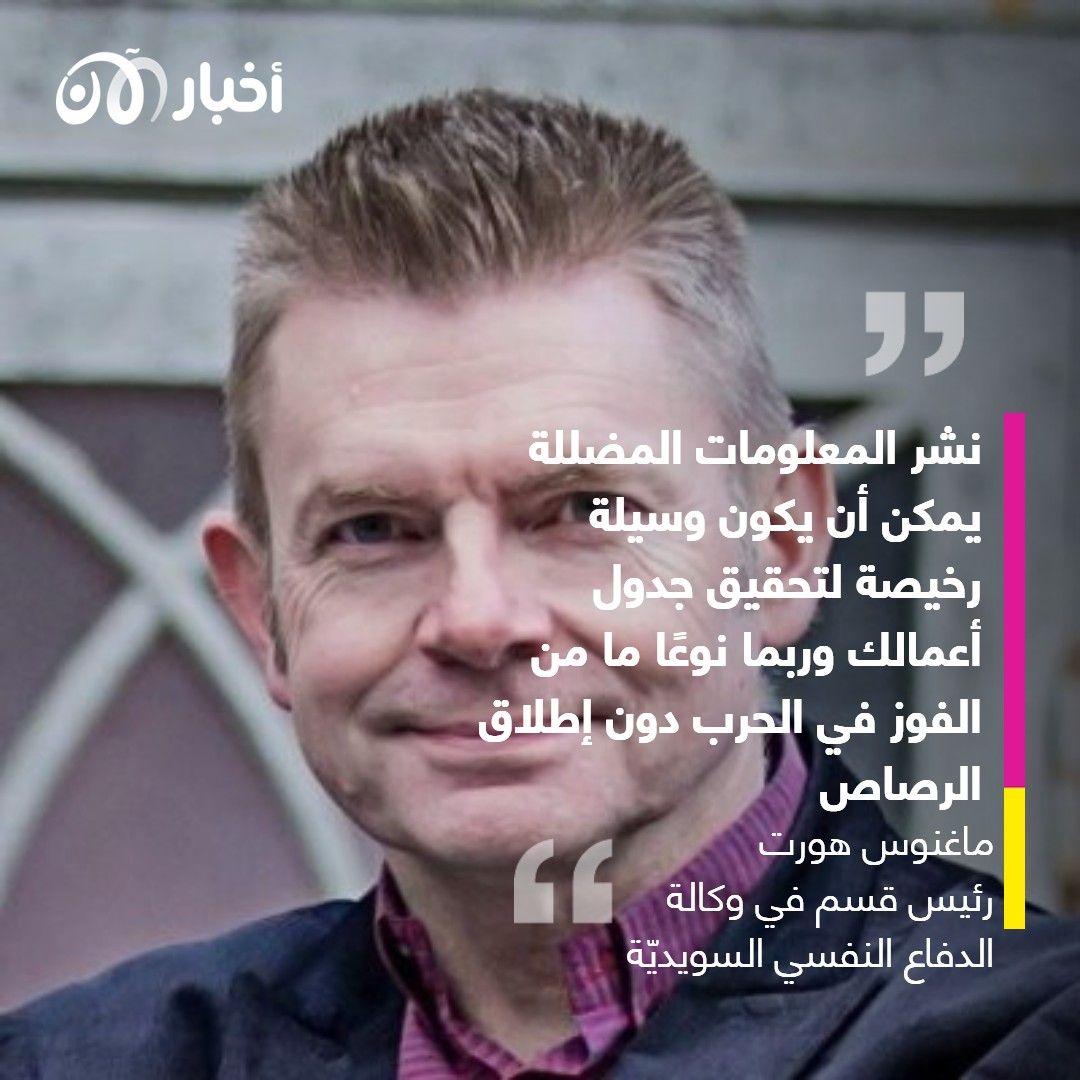 Hurt considers that “spreading disinformation and carrying out cyber attacks can be a cheap way to achieve a certain agenda or achieve certain goals or perhaps achieve some kind of victory in the war without shooting in a large-scale war, something that most countries want to avoid if they can achieve their goals Using the field of information is much better in terms of saving lives, time and money. So it is a very useful tool in the toolbox of authoritarian regimes.”

As for the platforms through which this misinformation is promoted, he said: “Of course, social media is used a lot to spread misinformation, but this can be done through traditional media as well, it may be by publishing articles in the press or through television or radio as well.” .

“I think the foreign adversary who wants to influence us don’t discriminate between the platforms they use, they use the platforms that they think are more effective and where we have weaknesses. But of course social media is newer and the desire to use it is because it’s hard to monitor, I think. And also there’s Users, everyone uses phones and everyone can spread that misinformation without knowing it, so all media can be used.”

Ahmet Davutoğlu, who criticizes the economic policies of the government: We have a shadow cabinet

WHO urges poor communities to ‘make sure they have better resources’

Images in Samsun created an indignation in Turkey! Shocking details… He did the same to his father…
May 10, 2022

Images in Samsun created an indignation in Turkey! Shocking details… He did the same to his father…

Lawyers evaluated the prison decision for Canan Kaftancıoğlu
May 14, 2022

The bill has been prepared! Tax deduction for the Financial Center
May 19, 2022

The bill has been prepared! Tax deduction for the Financial Center

Election statement from Ahmet Nur Cebi! “Besiktas presidential candidate should be more”
May 19, 2022

Hungary is referred to the Hague Court of Justice by the EU again
July 16, 2022

Galatasaray star Kerem Aktürkoğlu: ‘Thank you for everything’
May 21, 2022

Galatasaray star Kerem Aktürkoğlu: ‘Thank you for everything’

The body of one of the 2 children who could not be heard in Denizli was found
July 20, 2022

Algerian “Sola” snatches prizes from the Malmö and Milan Festival
May 9, 2022

Algerian “Sola” snatches prizes from the Malmö and Milan Festival

Egypt .. The judiciary issues its verdict in the most famous case of electronic blackmail
May 10, 2022

Egypt .. The judiciary issues its verdict in the most famous case of electronic blackmail