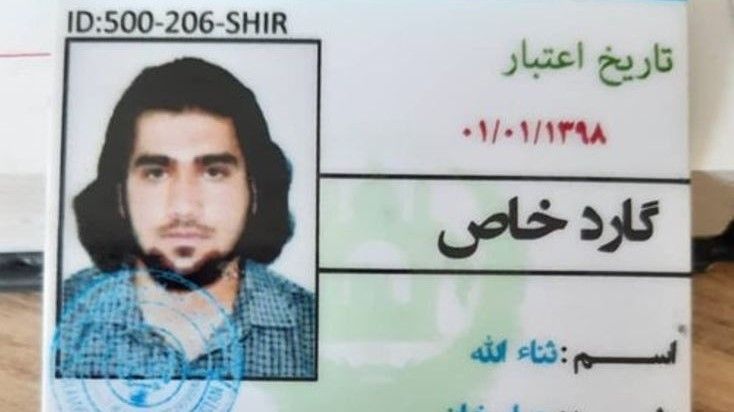 On Monday, the United States offered a reward of $10 million to anyone who provides any information that “identifies or locates” the leader of the Islamic State-Khorasan Province, Sanaullah Ghafari.

This reward, which was promised by the US State Department, also means every person who provides information that helps in “arresting or convicting” the perpetrators of the “terrorist attack that was carried out on August 26, 2021 at Kabul Airport” and claimed by ISIS-Khorasan Province, which resulted in about a hundred deaths among them. 13 American soldiers.

Earlier, the US Department of State’s Counter-Terrorism Office published a photo that they said was of Sanaullah Ghafari, known as Dr. “Shehab al-Muhajir”, the emir of ISIS in Khorasan. The published photo is the security card of the ousted first vice president of Afghanistan.

Supporters of the Taliban considered that ISIS had always been the protégé of the former Afghan regime.

And the United States, recently, included 3 leaders ISIS-Khorasan Province Afghanistan is on the terrorist list, according to Reuters.

After a series of attacks terrorist In Kabul and other Afghan regions, which were adopted by the organization, Washington announced the imposition of these sanctions on 3 leaders of ISIS-Khorasan Province and another man it accused of facilitating the financial operations of the terrorist organization.

The US Secretary of State said Anthony Blinken In a statement, the Emir of ISIS-Khorasan Province Sanaullah Ghafari, its spokesman Sultan Aziz Azzam and the leader of Kabul province, Mawlawi Rajab, was included on the list of global terrorists.

The U.S. Treasury also blacklisted Ismatullah Kholouzi for running an informal money transfer network based in Turkey to transfer funds to ISIS-K.

Zehra Taşkesenlioğlu from AKP was operating a copper mine in Africa

In light of Houthi refusal, the Yemeni government agrees to transfer oil from the Safer tank to another ship

Russia is lying.. there is no American submarine in Russian territorial waters

Facebook Twitter WhatsApp Telegram
Back to top button
Close
Featured Posts
The neighbors suffered from the bad smell for two years..then they discovered the disaster
February 21, 2022

The neighbors suffered from the bad smell for two years..then they discovered the disaster

Messi and Ronaldo in one team .. Details of Zidane’s plan to make the “impossible”
February 7, 2022

Messi and Ronaldo in one team .. Details of Zidane’s plan to make the “impossible”

Head coach Abdullah Capan makes a name for himself in Belgium
May 11, 2022

Head coach Abdullah Capan makes a name for himself in Belgium

“You cannot punish them for seeking their rights while leaving them alone with injustice”
August 30, 2022

Mustafa Muhammed was not enough for Nantes!
October 30, 2022

Mustafa Muhammed was not enough for Nantes!