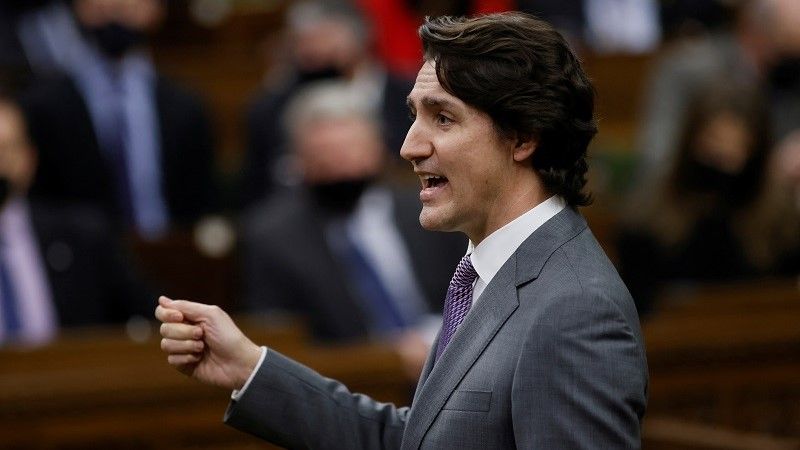 Trudeau: “All options are available” to end the movement of protesters against anti-Corona measures

Canadian Prime Minister announced Justin Trudeau Friday that “all options are available” to end the movement of protesters against health measures to combat Corona, who block roads, including those leading to the United States, in protests that Washington warned of its “dangerous” repercussions and prompted the Ontario provincial government to declare a state of emergency.

Two weeks ago, demonstrators demanding a retraction of various health measures to combat Corona paralyzed the center of the federal capital, Ottawa, and cut some major trade routes with the intention of hitting the economy and putting pressure on the government.

Since Monday, these protesters have closed the Ambassador Bridge, which is a vital trade artery connecting Ontario to the American city of Detroit, and cuts more than 25 percent of merchandise trade between the United States and Canada.

“Everything is on the table.”

And in view of the American pressures to open international roads whose closure affected the sectors of commerce and industry, especially the automobile industry, and the harsh criticism directed at him at home from the opposition, which accused him of inaction, he said Trudeau During a press conference, “everything is on the table because this illegal activity must stop.”

He added, “The borders cannot remain closed, and they will not remain so,” noting that he confirmed this to his American counterpart, Joe Biden, during a phone conversation.

In Washington, the US presidency said that Biden, during the call with Trudeau, “expressed his concern about the exposure of American companies and workers to dangerous repercussions, especially (in terms of) a slowdown in production, reducing working hours and closing factories.”

On Thursday, the United States called on Canada to use “federal authorities” to open roads on the two countries’ borders, especially the Ambassador Bridge.

The US presidency said Thursday that a number of US ministers and senior US homeland security and transportation advisers are in regular contact with their Canadian counterparts to “quickly bring an end” to this crisis.

On Friday morning, the Prime Minister of Ontario, where the Ambassador Bridge is located, as well as the federal capital, Ottawa, declared a state of emergency due to the “illegal” demonstrations that have continued for two weeks.

“We will take all necessary measures to ensure that the borders are reopened, and I say to the trapped residents of Ottawa: We will make sure that you are able to resume a normal life as soon as possible,” Doug Ford said during a press conference.

“We will do everything necessary to put an end to these occupations,” he added, addressing the demonstrators directly by saying, “Go back to your homes now.”

“We will urgently issue orders that clearly state that it is illegal to prevent the movement of goods, people and services along essential infrastructure,” he added.

In addition to the Ambassador Bridge, protesters are blocking two other major roads, the first in Emerson, linking Manitoba to North Dakota, and the second in Alberta.

Lack of a sense of leadership

These pressures came from the powerful American neighbor to be added to those exerted on the prime minister by the opposition parties that accuse him of failing to address the crisis.

While many attribute Trudeau’s reluctance to move on this issue to political calculations, especially as he is a candidate for re-election next June, the prime minister is trying to place the responsibility of the federal authorities on resolving this crisis.

But the opposition does not share this opinion and demands that he move quickly to resolve the crisis, or at least put forward proposals to solve it.

Candice Bergen, interim leader of the Conservative Party, said Trudeau “must act until this stops peacefully and quickly”.

Jagmeet Singh, the leader of the New Democratic Party (NDP), denounced Trudeau’s handling of the crisis. “It is unacceptable that the prime minister of one of the Group of Seven countries, which is one of the most powerful countries in the world, does not act, and does not demonstrate a sense of leadership to resolve this situation,” he said.

But according to Daniel Bilan, a professor of political science at McGill University in Montreal, “The problem is that Trudeau first threw fuel on the fire by putting all the protesters in one basket, then he was silent for five days, and now he doesn’t seem to be taking up his responsibilities.”

“We never want to deploy the army against the population, it is something to be avoided at all costs. It is a last, last, last solution,” the Canadian prime minister said in his press conference.

He added that before this last solution, “there are a lot of steps that we must take, and we are already taking them, so we haven’t got there yet (the use of the army).”

Trudeau made it clear that he would seek a “progressive” approach based on the intervention of reinforced police forces.

The Prime Minister addressed the protesters, saying, “If you joined the demonstrations because you are sick of Covid, you must understand now that you are breaking the laws, and the consequences are getting more serious.”

According to TUIK, the total turnover index increased

Ten casualties in the Government since the beginning of the mandate

Facebook Twitter WhatsApp Telegram
Back to top button
Close
Featured Posts
Ministry of Health shared the current coronavirus data on May 28, 2022
May 28, 2022

Ministry of Health shared the current coronavirus data on May 28, 2022

Body found in the forest in Antalya

The thief pretending to be asleep said, ‘Where am I when he saw the police?
October 16, 2022

The thief pretending to be asleep said, ‘Where am I when he saw the police?

The old man who disappeared in Bilecik was found dead
December 24, 2022

The old man who disappeared in Bilecik was found dead

Fire in the grocery store with picnic tubes: The brink of disaster was returned
May 21, 2022

Fire in the grocery store with picnic tubes: The brink of disaster was returned

The Wonder Child Act, which allows to grow important artists, has never been used in 21 years
May 21, 2022

The Wonder Child Act, which allows to grow important artists, has never been used in 21 years

“Magic effect”…Treatment of hair loss with the juice of a kind of vegetable
February 9, 2022

First they smashed it to sell, then they gave up and left

The world breathes a sigh of relief… Extinguishing the fires of the “terrifying nuclear fire”
March 4, 2022