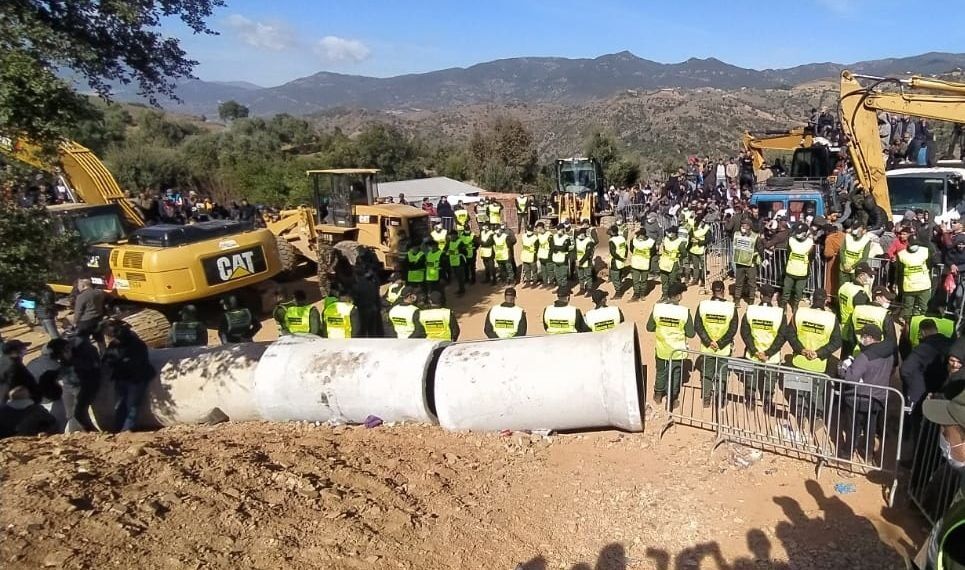 Rock the reason for the delay in saving the child Ryan

Abdelhadi Al-Tamrani, a member of the Moroccan Child Rescue Committee, said: Rayan, that a small rock delayed the process of reaching the child Ryan, who was stuck in a well, by 3 hours, noting that less than 3 meters separated the rescue teams from reaching him.

AndRayan The 5-year-old has been stuck since noon on Tuesday, February 1, 2022, inside a dry well at a depth of 32 meters, in the agricultural village of “Igran” of the Tamrout region in the Chefchaouen province, northern Morocco, while rescue teams continue efforts to get him out.

Al-Tamrani indicated that “the rock requires 3 continuous hours to be demolished, as it is not possible to dig hard so that the well does not collapse,” adding that “the hope for life remains, and we hope to God that the few hours will bring good tidings.”

And the Minister of Equipment and Water, Nizar Baraka, had said early today, Saturday, in a statement, that the authorities had “exploited all possibilities” to save Rayan, considering it “one of the most complex rescue operations similar due to the fragility of the soil.”

This comes as rescue workers in Morocco came close to reaching the child on Saturday, after rescuers worked all night using bulldozers to dig a parallel well in the hill next to the well.

By this morning the rescuers were digging horizontally towards the well and installing plastic pipes to protect against landslides and to retrieve the child.

Al-Tamrani indicated early today, Saturday, that the second rescue step is about to end, and that the rescue team is racing against time to reach Rayan, and that the excavation operations are going as planned.

The National Radio and Television Company, the state-owned, had quoted one of the rescue workers as saying on Friday February 4, 2022 that the boy was still alive.

The depth of the well in which the child Ryan fell is 32 meters and 45 centimeters in diameter, and the hole of the well narrows with the descent to the bottom; This prevents the rescuers from going down to retrieve it.

According to specialized experts, “the rescue process is related to the stage of installing pipes to ensure that no drift occurs.” These pipes are expected to secure the entry of civil defense personnel to rescue Rayan, who has been stuck for nearly 90 hours, according to Reuters.

In this regard, the rescue teams transported at dawn today, Saturday, a large iron tank to the place of direct excavation with a diameter of one and a half meters, along with large cement pipes, to protect the rescue crews, who began hours ago by hand digging, from any possible rock collapse.

The tragedy of the child Ryan aroused widespread interest on social networking sites and great anticipation for rescue operations, as the “Save Ryan” hashtag topped the list of the most discussed topics in Morocco and the Arab countries.

China lifts quarantine on entry to the country

New development in the case of Yagcioglu Apartment, which was destroyed in the Izmir earthquake

Finland and Sweden are close to "NATO"Putin’s losses from his invasion of Ukraine?

Minister Akar: Mehmetçik will shoot terrorists in their lairs!

3 detained in crane accident in Malatya

She lived 33 days inside a well .. A Sudanese girl gives hope for Ryan’s survival
February 5, 2022

She lived 33 days inside a well .. A Sudanese girl gives hope for Ryan’s survival

“Shocking study” reveals the impact of Corona in 129 countries
February 8, 2022

“Shocking study” reveals the impact of Corona in 129 countries

Rising house prices in Istanbul compete with Miami and Liverpool

Last minute: 2 million dollar inheritance fight! Half a century of age difference confused the family
May 20, 2022

In the video, Salah surprises everyone and returns to Liverpool training
February 8, 2022

In the video, Salah surprises everyone and returns to Liverpool training

60 people died in elephant attack in Zimbabwe this year