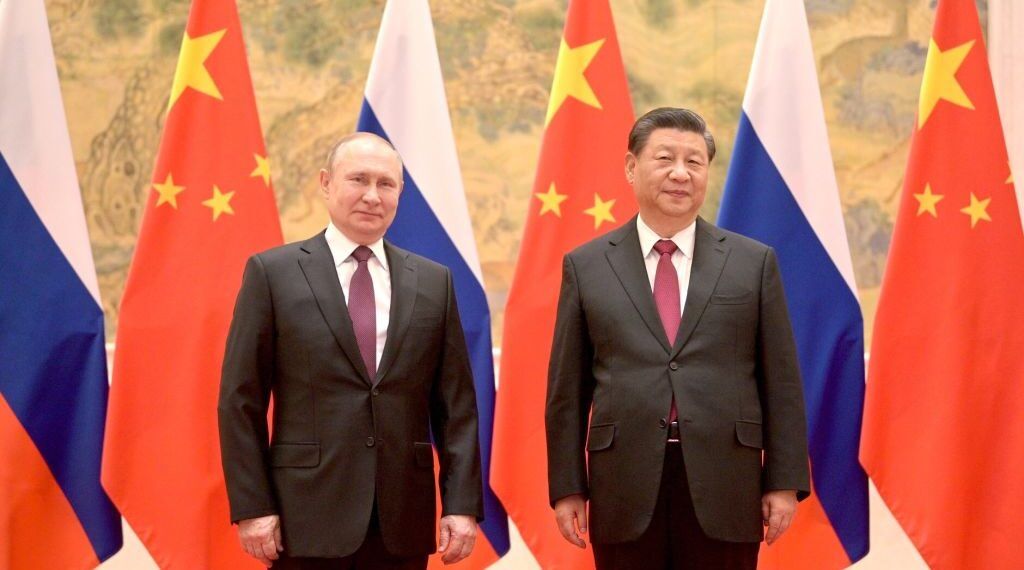 The Western world is facing expansion attempts by Russia and China

Last Friday’s Beijing summit came between the two presidents Russian And the Chinese are at a critical and sensitive time, especially for Russian President Vladimir Putin, whose country is in a state of crisis and tension with the West over Ukraine.

What is striking at the summit is the relatively long joint statement that was issued after that, affirming China’s standing by Russia and its unlimited support for it in the face of the United States and its possible sanctions.

How can these Chinese pro-Russian stances be explained? It is clear that Russia wants to return to strengthening its relations with China and strengthening its strategic partnership with it, as Putin said in his article published by the Chinese News Agency on the eve of his arrival in Beijing.

Putin has valued this partnership embodied in bilateral trade amounting to one hundred and forty billion dollars a year, and Putin aspires to bring it to two hundred billion dollars.

Hostility to America is the common ground that the two presidents emphasized at the Beijing summit. Just as Russia considers Ukraine or large parts of it to be part of Russia culturally and historically, China considers Taiwan an inalienable part of China.

While China is watching what is happening between Russia and the West regarding Ukraine, Taiwan is spinning in Beijing’s imagination, hoping to restore it at the appropriate time.

China views the Russian-American tension over Ukraine as a test of the extent of the United States’ influence and its effect in diverting the attention of the US administration from China’s attempts to regain Taiwan.

China has previously declared its support for Russia’s positions and joined them in trying to block any action on Ukraine in the Security Council.

Putin’s visit to Beijing comes within the framework of mobilizing support for Moscow’s position on Ukraine, as the United States replied that NATO membership is a matter of NATO alone.

This response to Russia’s questions was not satisfactory for President Putin, who believes that Washington chose to ignore Russia’s security concerns and accused the United States of using Ukraine as a tool to drag Moscow into an armed conflict. With accusations continuing to increase Russia’s mobilization, Moscow continues to deny the accusations.

While the United States continues to deploy weapons in NATO countries close to Russia, weapons are flowing into Ukraine.

Moscow insists that NATO’s deployment of its missiles near Russia’s borders poses a direct threat to it. This Russian position will put more obstacles in the way of finding a solution to the crisis.

The Russian president’s defiance over Ukraine seems unusual. What is behind his overconfidence in spite of US threats and the Atlantic buildup sent to the allies in Eastern Europe? Are his calculations accurate if he rushes into his adventure, or is he a boss full of arrogance and his advisors only tell him what he wants to hear?

Is what he is doing merely showing off his decision not to engage in a real military confrontation, but he is trying to provoke NATO with the intention of preventing it from annexing Ukraine?

So far, US actions have been limited to supporting Ukraine without direct intervention in addition to the threat of economic sanctions.

But President Putin seems to have calculated everything, as his relations with China will open a market for Russian gas for him as an alternative to the European market if Europe stops importing it.

He promoted Russian industries to become a substitute for imports from the West, and included technological imports from China instead of American imports in this field.

He also worked to convert domestic loans that were in dollars into rubles, and agreed with China to convert trade exchange between the two countries to be in national currencies, not dollars.

China will be the gateway that may save Russia from the repercussions of US sanctions. But how long can Russia rely on this scenario to avoid sanctions, if they occur?

Among the sanctions that Russia will not find an alternative to are the separation of the Russian banking system from the international express payment system (SWIFT), the imposition of sanctions on Russian banks, the suspension of their activities abroad and the freezing of their assets. Russia may depend on its stock of dollars, which amounts to about six hundred and thirty billion dollars, but how long can this stock suffice the Russian economy?

The question now is will other countries share the United States in its sanctions? Some countries may do this, but sanctions will not be binding on all countries, because they certainly cannot be issued by a Security Council resolution, because such a decision will be faced with a Russian veto first, and perhaps a Chinese veto as well.

There is no doubt that the drums of war are now beating in Eastern Europe, and news and information are leaking full of warnings, accusations and scenarios, the latest of which is that Russia will publish a fabricated video of a Ukrainian attack as a pretext to start its attack and invasion of Ukraine.

But can Europe bear a new war? And in the event of a war between Russia and NATO in Eastern Europe, who will guarantee that its fire will not spread to other regions of the world and turn into a global war and then into a nuclear war?

Could one of the parties easily win this battle without terrible and appalling losses? It goes without saying that igniting a war in Europe is not a good thing, with nothing behind it but devastation and destruction, and it will not be easy to stop such a war after its outbreak.

They ate my youth, I won’t eat my child’s future

The doctor had intercourse with his patients in the family health center! It was exposed…
May 11, 2022

The doctor had intercourse with his patients in the family health center! It was exposed…

We borrowed 23 billion TL from banks in a week

Liverpool maintains league competition with a precious victory over Aston Villa
May 10, 2022

‘Turkey is worse than the War of Independence’

The Algerian president announces a monthly grant for the unemployed
February 16, 2022

The Algerian president announces a monthly grant for the unemployed

‘My only dream is to be the Chairman of the CHP’

The trailer of the TIR caught fire in İpekyolu!

Last Minute: Joint statement from the table of six: ‘Our presidential candidate…’
August 21, 2022

Last Minute: Joint statement from the table of six: ‘Our presidential candidate…’